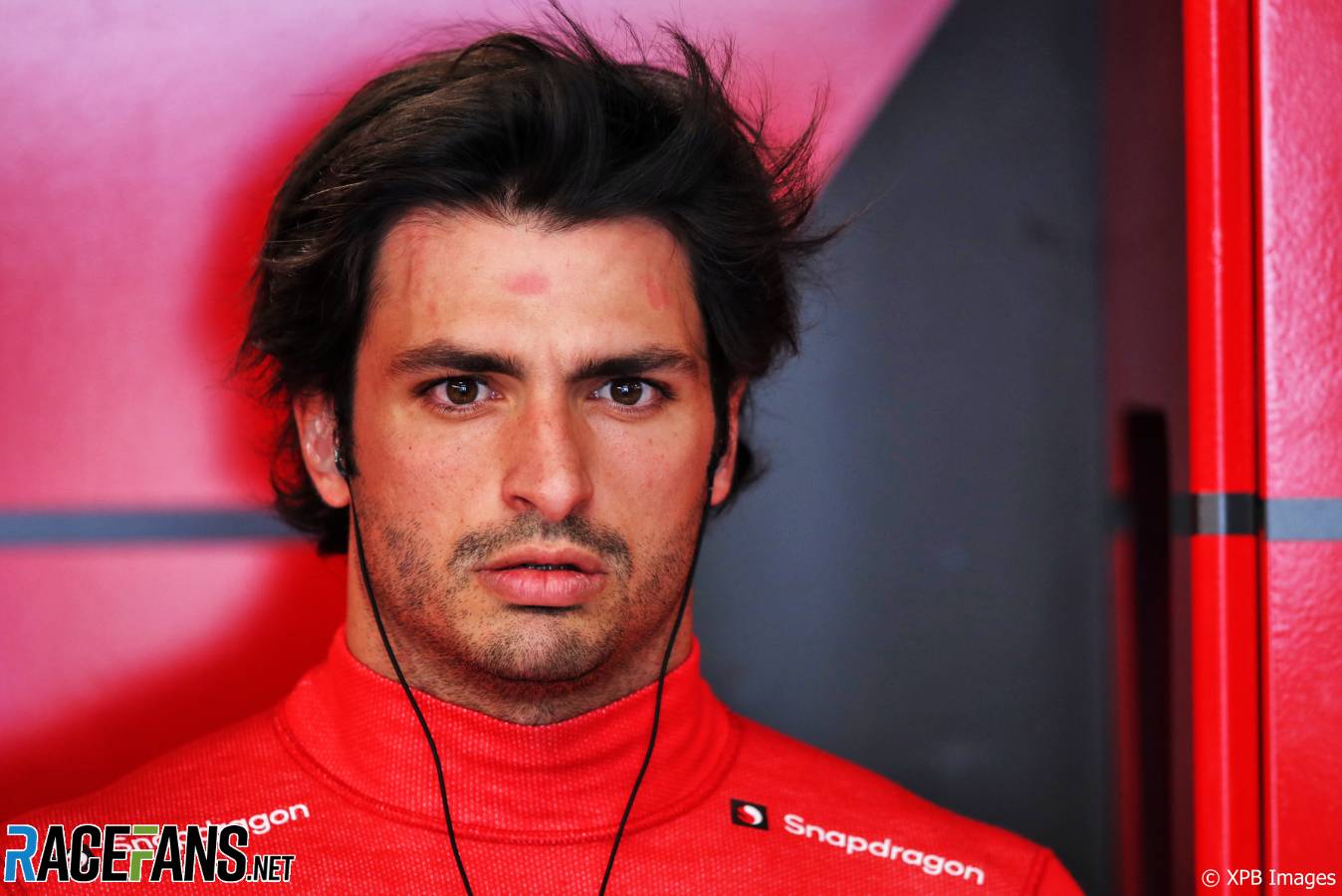 Being the son of a two-times World Rally Champion and earning the support of Red Bull gave Carlos Sainz Jnr a strong chance of gaining a place in F1. However for a while it seemed he might miss out on that opportunity.

Leading the Formula Renault 3.5 series in mid-2014, Sainz’s prospects looked very good. But the emerging talent of Formula Three driver Max Verstappen put a spanner in the works: Red Bull signed him up to their young driver programme alongside Sainz, and immediately gave Verstappen their sole vacant F1 seat at Toro Rosso for 2015.

It was only when Sebastian Vettel decided to leave Red Bull later in the year that a space opened up for Sainz. With Kvyat moving up to take Vettel’s place, Sainz could now slot in alongside Verstappen.

He had given a good account of himself during 2014, becoming the first Red Bull junior driver to win the Formula Renault 3.5 championship. However he had blown hot and cold during the season, sometimes showing his rivals a clean pair of heels (as at Paul Ricard), other times struggling (as at Jerez, where he failed to score a single point).

But an end-of-season F1 test cemented Red Bull’s decision to give Sainz the drive he worked hard for. He made his way there despite switching codes more or less once per season throughout his junior career.

Sainz had begun karting at the age of seven and by 2010 Red Bull had got interested and brought him onto their Junior Team. His first season of car racing was in Formula BMW, and he placed a strong fourth (and top rookie) in the F1-supporting European series.

As BMW ended its junior series Sainz switched to Formula Renault 2.0. He won the Northern European Cup in 2011 but was beaten to second in the more prestigious Eurocup by Robin Frijns. Sainz also made his first starts in Formula Three, which became the focus of his career the following year.

Sainz was leading the British championship after the first two triple-header rounds, but by the end of the year he had fallen to sixth in the standings. In a hectic schedule he also competed in the European series, where he finished ninth.

It was all change again for 2013 as Red Bull placed Sainz in GP3 and later added him to their Formula Renault 3.5 line-up as well. Sainz did not take to GP3 as well as team mate Daniil Kvyat, who claimed the title while Sainz ended the year fourth.

But his part-year in Formula Renault 3.5 stood him in good stead for 2014 where it was the focus of his season. Driving the same DAMS car used by Kevin Magnussen to take the title the previous year, Sainz took a series record of seven wins on his way to the crown – and a place in F1.

Despite an uncompetitive Renault engine and an unreliable car, Toro Rosso’s STR10 performed well when it was shown a corner and Sainz took immediate advantage, scoring points on his debut in Australia and repeating the feat on his second start.

However a poor finishing record – which was almost entirely the fault of the car and included four consecutive breakdowns at mid-season – limited his potential for scoring points. It was a problem Toro Rosso never got on top of – at the penultimate round in Brazil his car stopped on this way to the grid and broke down again shortly after the race began.

Sainz persevered, however, and showed his grit in Russia where he bounced back from a fearful high-speed crash in practice to take part in the race, only to be stopped by another problem. At the next round in America he again had to start at the back, but this time climbed to an excellent seventh at the finish.

Team mate Verstappen, however, was three places ahead. He also attracted the most attention and scored the most points of the two when the season reached its end.

Four races in to 2017 and the situation had changed little: despite car trouble Sainz was showing plenty of promise but Verstappen a little more. That proved decisive when Red Bull decided to return Kvyat to the junior team: it was Verstappen who got the promotion.

Unmoved, Sainz duly turned in one of his best drives of the season on home ground at the next race. This began a string of points finishers which saw him take the overwhelming majority of Toro Rosso’s points.

Red Bull were quick to extended his contract for another year, though with the top team still full he remained at Toro Rosso.

Sainz made a strong start to his third season at Toro Rosso, regularly placing inside the top 10 over the opening races alongside the more experienced Kvyat. He peaked with a strong fourth place in Singapore after the leading Ferraris went out in a collision with Verstappen at the start.

He only made two more starts as a Toro Rosso driver: By the United States Grand Prix he was in a Renault, joining the team as Red Bull made arrangements for Toro Rosso to take over McLaren’s Honda power unit supply. His first race at the team went well, as he started and finished seventh.

A full season at Renault followed in 2018. To begin with Sainz generally followed team mate Nico Hulkenberg home, though he grabbed a strong fifth in Baku. By the second half of the season Sainz was increasingly holding his own against Hulkenberg.

But he’d already attracted the interest of another team: For the following season he would be a McLaren driver.

McLaren had laboured for three years with Honda power then flattered to deceive after witching to customer Renaults at the beginning of 2018. Fernando Alonso was disenchanted and moved on, while McLaren also showed Stoffel Vandoorne the door.

In their places came an all-new line-up of Sainz and rookie Lando Norris. Sainz adapted to the team leader role swiftly and was by fair their top scorer, taking sixth in the drivers’ championship. That was achieved at the expense of both Pierre Gasly and Alexander Albon, who each had half-seasons at Toro Rosso and Red Bull, as the latter cast about looking for a successful partner to Verstappen.

Sainz followed Verstappen, Gasly and Lewis Hamilton home in Brazil, but a five-second time penalty for the latter promoted the McLaren driver into a podium position for the first time in his career.

While the start of the 2020 season was delayed due to Covid, Sainz kept busy. After five seasons, Ferrari had decided to dispense with the services of Vettel, and sought a replacement. Sainz’s strong first season at McLaren made him an obvious candidate, and he was snapped up for 2021.

What followed was a somewhat mixed season for Sainz. While Norris took an unexpected podium in the season-opener, Sainz took a handful of points finishes, then hit a rough patch. Through a four-race spell he only finished once, but he made it count, chasing home shock Italian Grand Prix winner Gasly.

He came good over the run-in to the final race, finishing no lower than seventh over the final seven races. That secured sixth in the championship for him again (winning a points tie with full-time Red Bull driver Albon) and contributed the majority of McLaren’s points haul as they bagged third place. With that, he was off to Ferrari.

He joined Ferrari as the team was in comparable shape to McLaren two years earlier: Pulling itself out of a slump. He also faced a tougher team mate in Charles Leclerc, who led the way early in the season while Sainz adjusted to his new team.

However while Leclerc delivered the eye-catching results – pole positions in Monaco and Azerbaijan, and leading the majority of the British Grand Prix – Sainz’s consistent points-scoring served him better. When the chequered flag fell in Abu Dhabi, Sainz’s haul of 164.5 points put him a best-yet fifth in the championship ahead of Norris’s McLaren and Leclerc.

He might have scored more had the conclusion of the final race played out less controversially. Sainz was holding third place behind Hamilton and Verstappen when FIA F1 race director Michael Masi instructed the lapped cars between the two leaders to move aside, but not those between Sainz and the Red Bull in second place. That decision, which contravened the rules, deprived the Ferrari driver of the chance to fight for a better position in the season finale.

By his own admission, Sainz wasn’t entirely comfortable in the F1-75 at the beginning of the 2022 season. Despite spinning out in Australia, he was handed a new contract before the next race, where he also dropped out early.

But things soon improved. Unlike his team mate, Sainz made the right tactical calls in a wet Monaco Grand Prix and was rewarded with second place. Then at Silverstone he went one better and finally delivered his first career win, capitalising on a late Safety Car period after which he passed his team mate.